The biggest buy-in event at the ongoing Adda52 Colossus Series, 200K Highroller, registered an impressive 61 entries on Day 1. A total of 25 runners survived the day’s onslaught, although late registrations remain open until the end of Level 16 on Day 2. The 2020 WPT India Super High Roller champion Siddhanth Kripalani (641k) bagged the Day 1 chip lead with Santosh Kumar (553k),Karan Malhotra (331k), WSOP bracelet winner Kartik Ved (327k) and Sahil Agarwal (316k) rounding out the top 5 stacks of the day. Given below is the complete list of the survivors from Day 1 of the event: Rajesh takes down the pot with Ace high and defending champion Sriharsha gets busted. Vikram improves to two pairs on the river to take down the pot and bust Srihari.

Kanishka from UTG open-shoves for 43.5k and Zarvan Tumboli from button calls. Sumit Sapra, who had  both of them covered goes all-in from the small blind. Zarvan Tumboli  makes the call.

Kanishka flops a set to win the pot to triple up, while the side pot gets chopped between the Zarvan and Sapra.

Aditya G Takes It Down From Bhavit

Deepankur Gupta from cutoff shoves all-in for 18.5k and gets a caller in Shriharsha from SB

Pocket eights hold up, winning the pot for Sriharsha and busting Deepankur in the process.

In a three-way action, Bhavit from button opens to 4k.

Action back to Bhavit who gets out of the way, folding his hand.

Pocket aces hold up and Kartik Ved takes down the pot, busting Bhandari in the process. Pocket jacks hold up and Patni wins the pot, busting Girish Shahane in the process.

Santosh flops a six pair and takes down the pot, busting Meherzad in the process.

Arjanveer Chadha  from UTG open-shoves for 11.3K and Somashekar from SB calls.

Somashekar gets a top pair on the turn to win the pot and bust Chadha in the process. In a three-way action, Vaibhav Sharma from MP opens to 2.6k and gets two callers in Siddhanth Kripalani (SB) and Prakash Bulchandani (BB).

Both players in the blinds check, while Vaibhav bets 5k. Siddhanth calls, while Prakash folds. In a pre-flop three-way action, Santosh Kumar from UTG opens to 2.4k and a player from the HJ calls. Meherzad Munsaf from the button moves all-in for 17.2k to which Santosh also shoves all-in. HJ folds.

Pocket aces hold up to win the pot and Meherzad, who had finished runner-up in this event in 2018, gets a much-needed double up.

Santosh Kumar Takes It Down From Sriharsha

Santosh turns over pocket jacks against the pocket tens of Sriharsha. Pocket jacks hold up to win the pot. Sriharsha opens to 2.2k, a player from the button calls and Santosh Kumar from SB raises to 7k, which Loveleen Singh from the BB re-raises to 18k. Both Sriharsha and the  button fold, while Santosh Kumar calls.

Loveleen goes all-in for 40.5k, which Santosh calls and turns over 10h 10d against the Qh Kh. The pocket tens hold up, winning the pot for Santosh and busting Loveleen in the process. There are over 38 entrants in the field and some notables among them include that 2 GTD Colossus HR Satty winners in Loveleen Singh, Sumit Sapra, Amit Tejura and Ayaz Khan – they all qualified live satellites held between 2nd to 3rd August here at the Deltin Royale in Goa. In a pre-flop action, Bhavit from the big blind opens to 5k and Anup Palod from button calls.

Bhavit leads out with 6k and Anup bets 26k, which Bhavit calls.

In a pre-flop action, G. Abraham open-shoves for 8500 and Vaibhav Sharma from the big blind calls.

The board runs dry and Vaibhav take it down with Ace high, busting Abraham in the process.

Some More Notables Join The Action

The field continues to grow and as we can see there are 31 entries already on the board. Some notables among the new entrants include the likes of the inaugural Colossus High Roller champion Sriharsha Doddapaneni, Ram Kakkar, Arjanveer Singh Chadha, the inaugural WPT Prime Main Event champion Zurvan Tumboli and High Roller Colossus Satty (LIVE) winner Sumita Sapra to name a few.

Abraham from HJ opens to 1600 and Ayaz Khan from CO re-raises it to 4,000. Siddhanth Kripalani from BB calls. Action back on Abraham on the HJ, who make the call and they all take to the flop.

Siddhanth shows Ad Jc and Abraham Ac Jd. The pot gets chopped between the two.

Sriharsha Doddapaneni, who had championed this event in 2018, opens to 1200 and yesterday’s 50k Warm Up Bounty final-table finisher Rejesh Jagannadham from BB raises to 11k, which Sriharsh calls.

Rajesh leads out with 11k and Sriharsha flat calls.

Rajesh checks and Sriharsha goes all-in for 56k. Rajesh tanks a little before finally folding it. In a three-way action pre-flop, Loveleen Singh from the button opens to 1.1k. Shashank Jain from SB raises to 4.1k and Bhavit from BB re-raises it to 15k.  While Loveleen folds, Shashank makes it 35k and Bhavik flat-calls.

Shashank leads out with 10k and Bhavik calls

Some More Notables In The Field

The tournament has reached level 3 and there are 18 players in the field. Some notables among them include the likes of Spartan Poker Pro and WSOP bracelet winner Nikita Luther, Colossus HR (Online) Satty winner Siddhanth Kripalani, Colossus HR (Live) winner Ayaz Khan, Loveleen Singh, etc. Spartan Poker Pro Nikita Luther is the only female to have won the WSOP bracelet for India. She is one of the new entrants at the Adda52 Colossus 200k High Roller here at the Deltin Royale. Several big names have already joined in and we are expecting many more big names to be a part of the action. Pre-flop, Anand Sankaran from UTG opens to 600 and Roshan Bhardwaj from BB re-raises it to 2600 and Anand calls.

Roshan leads out with 1700 and Anand fires a bet of 10k, which Roshan calls.

The 200K Colossus high roller has been favourite among the high-stakes players of the country and its popularity is growing every edition. The inaugural edition of the event took place back in 2018 and had registered 44 entries. The  event was shipped by Sriharsha Doddapaneni for a massive INR 28.70 Lac, while Meherzad Munsaf locked in a runner-up payout worth INR 19.16 Lac. 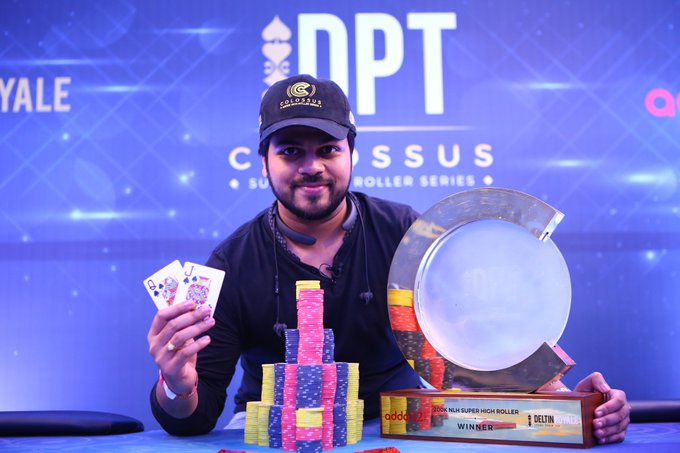 Some Notables In The House

Finally, the tournament is underway and there are already 6 players who have entered the event. Some notables among them include the Adda52 Game Ambassador Kunal Patni, Roshan Bhardwaj and Meherzad  Munsaf, a well-known MTT player who had finished runner-up in this same event in 2018.

Mumbai-based pro Kunal Patni is making his third appearance at the Colossus Series after playing it in 2018 and 2019. Patni, who had finished runner-up in the 25K NLH Bounty at the inaugural 2018 Colossus series, had a decent run at the 2019 Colossus edition. He finished 7th for INR 1,40,000 in the 50K Warm-Up and then followed up that with a 4th place for INR 10,00,000 in the main event. It will be interesting to see if Patni can make a deep run and add a massive payday to his live winnings.

Shuffle Up and Deal

The cards are in the air on Day 1 of the Adda52 Colossus 200k High Roller. Fasten your seatbelts and buckle up as the highest buy-in event of the Adda52 Colossus High Roller Series is about to begin. The high-stakes players from across the country are set to kick off the 200K High Roller (4th to 6th August) today at 2 PM inside the luxurious Deltin Royale casino here in Goa

The series officially kicked yesterday off with the 50K Warm-Up Bounty event, which found a winner in the long time poker pro Shravan Chhabria who defeated a field of 98 entries including Pratik Kumar in a short-lived heads-up match. Now, the buy-in has increased and the stakes will be even bigger for many of those that will be looking to add a whopping payday to their resume.

Last edition, it was India’s poker India’s poker super star Aditya Agarwal who captured the title in this same event. He overcame a star-studded field of 42 entries and defeated Jasven Saigal en route to the title and the INR 31 Lac top prize. Agarwal has already joined the ongoing Colossus Series and you can expect to see him back on the felt today in hopes of defending his title in this event.

When the action gets underway, each player will be given a stack of 100K chips with the blinds starting at 100-200 and 0 big blind ante. The levels will be of 40 minutes in length with a 15-minute breaks after every three levels. There will also be a dinner break of 20 minutes. Late registration will be open throughout the day and until the start of level 16 on Day 2. The play for Day 1 will come to a close at the end of level 13. Stay tuned in right here for all the updates from the tournament!